skip to main | skip to sidebar

I'm very proud of this video. I directed it and took over 2 weeks to edit and put it all together. It's for the song Devilution (yes, the bar riot song to most of you) off of the album Scream at the Screen. You can check out The Reanimated http://www.myspace.com/reanimatedpunk

I'm proud of these guys they have overcome a lot to become a great band. Even though they are a pain in my ass I love them to death!

Check it out and let me know what you think!!! 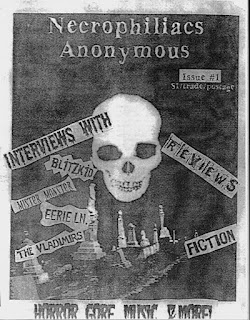 I was going through folders of really old stuff I had and I found my old zine files. Which brought up a subject I wanted to write about - and share some stuff from the folder. Enjoy!


I've been asked numerous times how I know a lot of the bands I do and how I ended up booking shows. I decided to make this post about that and give a little background on why and how I started doing what it is I do.

All throughout growing up music has always had a significant role in my life. My father was a guitar player and always encouraged us kids to listen to what we wanted with an open mind and try different musical endeavours. I took up piano. Actually I took classical piano classes for 6 years. Now if given the choice between the piano and the bass guitar - I'm going for the strings. Anyhow... 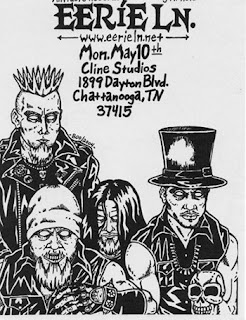 (An Eerie LN flyer sent to me years ago when I was doing my zine. They are no longer together but most the members have a superb new band called The Horrifics check them out!)


My parents were always the cool parents that all my friends wished they had. My mom bought my tickets to my first real concert at the tender age of 13 that was Cannibal Corpse and Brutal Truth. HA!

When I was a young teen I was into metal a lot. Everything from Slayer to Deicide. My parents, aunts and uncles used Metallica and Iron Maiden videos as a babysitter for myself and my cousins.. Ha! When I turned about 16 I started getting into a lot of punk. I've always been eclectic too much of one thing bores me. Maybe that's why I own Harry Belafonte records.

Anyhow, I had always had a deep love for music with a darker theme. I loved (and still do) The Misfits, Samhain, Danzig, The Cramps, The Damned, TSOL and the likes. (This was sent to me along with a burnt CD, my first thought was this is probably going to suck! (No offense Alex!) Boy was I wrong ha!)

When the Misfits made their way back together with Michale Graves and started touring it seemed like horror punk was getting a revival. So I decided to cultivate my love for this darker music with a printed zine. I called the zine Necrophiliacs Anonymous. To me the name was hilarious.

This was far before the days of Myspace. When bands actually used the postal system to make contact with people. When people actually went to Kinkos and printed, pasted and stapled their nights away making zines.

One of the first bands I featured in my zine was Blitzkid. I had ordered something through the company Angry Young and Poor and got a printed catalog along with my order and in the back of it was a hand drawn ad (by Goolsby) about a horror punk band out of Virginia called Blitzkid with some contact info. So I shot off an email and asked for the demo or whatever it was the ad was for.

A couple weeks later I received it and it blew me away. These guys were stuck between mountains making awesome music. Eventually I helped them launch an MP3.com site back when that was around and became good friends with those guys. I've gotten to see them go from rocking away in very small clubs to touring Europe and being in bands with Doyle. Holy shit. In some weird way it's like watching kids grow up. Makes you sentimental in a sense or it makes you feel old hahaha.. Sometimes I don't know which.

Another band that was around then was The Vladimirs from Cincy. They always played out back in the day - mostly to metal crowds but everyone loved their music. No matter if you were a metal kid, punk, horror punk, straight edge everyone enjoyed the Vlads shows. It was like having a hometown Misfits, because everyone even your mom probably digs the Misfits. Mine does. I always kept contact with these guys and as soon as I got the zine up I put them in there too.


We can only hope they will play out again very soon. (Very old newsletter sent out by The Vladimirs with info and releases)


To make a long story kind of short, (because I could sit here all day and type stories out about bands!) most the people I met while doing my zine eventually led to me booking shows. Back in 2005/2006 I was in the mood to get involved in the scene I love again and decided to start booking shows at Sudsy Malones here in Cincy. Since no one was booking what I wanted to see why not do it yourself?

So, I called on people I knew. I got Blitzkid to come play for the first time in years and it pretty much went from there one show turned into two which has now turned into so many I can't count and by time I'm 40 I will probably need hearing aids. I must say we now have a pretty fantastically killer horror scene here in Cincy. I would dare to say it's one of the very best on this side of the map. I know, I've been on tour to other cities. My dedication and love for music is why I continually book shows. To have people say thanks, that show was killer. However I do miss my zine days and that's why I have the blog!

So in a nutshell, that's where it all came from and that's why I book shows today. I love all the people I have met in my travels and musical endeavours and every time I book a show it's like a huge party and all my friends are invited!


Keep it evil people!
Until Next Time!
-Evil Abby

Evil Abby
Greater Cincinnati, OH
My name is Abby. I am 27 years old and live in the Greater Cincinnati area. For the last 8 years I have booked and promoted shows one of my blogs is all about that. Other than that I enjoy art. I also have a blog of all my artistic exploits. Check em out!